Born in 1989 in Fontanafredda (PN) Italy, she graduated in 2012 in Multimedia Science and Technology from the University of Udine, Italy. She obtained a developing interest in photography since the start of her early academic years, with particular devotion to architecture and urban landscapes and a simultaneously matured passion for motion pictures and their imagery.

The title of her thesis: “Paolo Gioli: kinerostenopie” is an internal reflection of contemporary experimental cinema and consists of a shortcut film developed entirely from the integration of 35mm cinematographic film stock.

She held a conference during the “Spilimbergo Photography” event in 2012 in which she explored the venetian filmmaker and photographer. She continues to work to this date in the video sector during her experiences with the CRAF (Center of Photographic Research and Archiving, Spilimbergo Italy) where she has created numerous promotional videos and documentary video interviews of known photographers such as Uwe Ommer, Mario Cresci e Guido Guidi. In addition to her experience within this center, she performs historical archiving, cataloguing and digitalizing photographic material (as well as acting occasionally as exhibit assistant and coordinator). She collaborated in 2014 and 2016 with the photographer Gianantonio Battistella during the course “Project and Photography” which focused on architectural and panoramic landscape photography. During the same year she exhibited her own works within the exhibit “The Italian panoramic landscape. Photographs 1950-2010” at the Trastevere Museum of Rome and following at the Klovicevi Dvori Gallery in Zagreb. In 2015 she participated as well in the exhibit "Fortified Patrimony. Rare glimpses of the Adriatic" in Koper and Venice. She has paralleled experience continuing to date as a photographic instructor in Italian public middle as well as high schools.

Her private interests and hobbies are: 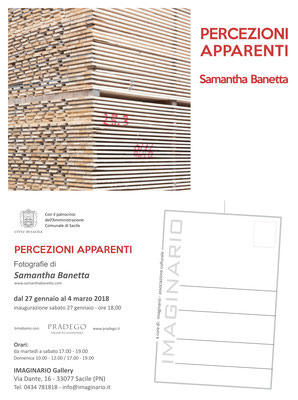 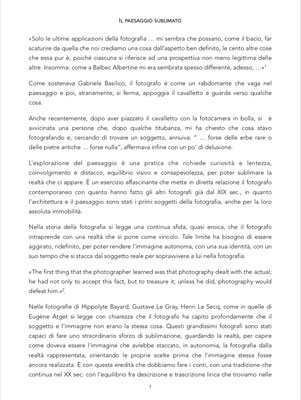 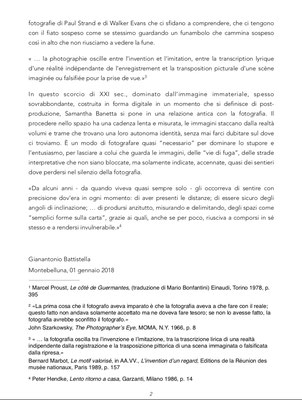